"To explain what Cops Direct is all about, and why we do what we do for our law enforcement around the nation, I think you've got to go back a few decades to Oakland California, where I was born and raised. Not only did we live there, but my family owned car dealerships in the downtown area.

We lived in a nicer part of Oakland, but still we worked and we shopped in areas that were a little bit precarious sometimes, if you will. Back in the '70s and '80s, Oakland was known for its murder rate. It was known for the drug problems and everything that came around with that.

Over time, especially through our car dealerships that my parents had down on Broadway, we got to know Oakland police. Forged a relationship with them to the point where we would actually provide them with any beat up old trade ins that they could use as undercover surveillance cars for a day or two. They'd go out there and surveil and do what they do and nab bad guys, in their undercover ways if you will.

Then, they'd use it for a few days, turn it in. They always had a fresh fleet of undercover cars so they could never be discovered. You just realized the work these officers put in. We went go on ride alongs with them every once in a while, and you'd see that between the politics and being outgunned and everything else, the cops had a tough time.

Then, fast forward a little bit, into the '90s. My family and I, and I was still a teenager, we moved out to the suburbs, but we immediately started to get to know the sheriff's deputies out there. My mom was on a police board. I met some great police officers. Became friends of mine. They told me to join the Sheriff's Posse, which is nothing more than a civilian support organization that supports law enforcement.

As things went along, I get to know these officers and learn that the problems that our officers have is not just necessarily those that we see in inner city. But, it's stuff that happens in every type of community across the nation. Whether it's rural or suburban or the big crazy metropolitan areas.

Just staying in touch with officers and all that, you realize that things really hadn't changed through the decades. Cops are still being shot at. Cops are still having to deal with innocent civilians that are caught in the line of fire or whatever else is happening. Then, tied to that also a lot of my friends are firefighters.

I was realizing that they're dealing with law enforcement when it comes to traffic accidents or anything else where there are wounded or injured civilians. We'll fast forward really briefly to 2010, whereby accident, I created this other non-profit called Troops Direct. Maybe you've heard of it. It's pretty awesome. You can check it out on troopsdirect.org.

But, as Troops Direct evolved, and we were supplying our military with critically needed items, the realization came to me after having some conversations with some cops I knew, that there was a serious shortfall when it came to the training and the supplying of medical equipment so that law enforcement officers could help themselves, help a fellow officer or aid a civilian when bad things happened.

By bad things, I mean, if there is a broken bone or blood being shed, that an officer can provide that support or that aid to somebody that needs it so that simply, they don't die. That's really what Cops Direct is all about. Here we are now, doing this podcast. My first podcast ever, by the way. I've never been a fan of podcasts. Everyone's got one it seems like. I hate just being part of the crowd, but a good, good friend of mine, Brian Sussman, who is one of the most well known talk show hosts on the West Coast, if not in the nation, said, "Hey, here's how you do podcasts."

Jake White, who works for us here, said, "Hey, boss. You've got to start doing podcasts." So, we're trying this out. But, back to Cops Direct a little bit here, I was looking at some statistics. The average EMS response time in the United States is right around 15 minutes or so. Can you imagine if you're a cop, and you are shot, and you have no medical equipment to save your own life. You get on that radio and you say, "Officer down," as you look down and you see blood coming out of your body somewhere because of a gun shot wound or a stabbing or whatever, you're hoping that you're alive in 15 minutes when that ambulance arrives. Or your partner.

Or, what if you are an officer who is on patrol, and you're just driving down the street, and you come across an overturned vehicle? There, laying inside the vehicle or ejected from the car, is just an innocent civilian. A child perhaps, who is laying there unconscious. Maybe they're bleeding out of their artery because of the fact that they hit the ground and whatever and they're bleeding out and they're going to die. Now, you've got to wait 15 minutes, hoping that between your duty belt that you're going to and use as a turnicate, and perhaps your undershirt or your uniform shirt that you'll use as a bandage, you'll be able to keep that individual, assuming there's only just one, alive.

That's where Cops Direct really has its root is providing agencies around the nation with the critically needed first responder trauma care items that they need to save the lives of themselves, a fellow officer, or a civilian when bad things happen. As of this recording, and we're coming up on the end of March 2022, and let us know what you think of this by the way. I appreciate it. Like and share as they say. Subscribe. We've helped officers in departments in over 30 states, from some of the largest municipalities to the smallest ones that you've never heard of.

I can tell you that we've supported the largest county in the nation by square miles, which is San Bernardino County in southern California. We've helped them out with stuff for their SWAT team for trauma care, all the way across for Search and Rescue. We recently helped the entirety of Boise Police, who before their new training captain came in, who is an outstanding guy, before he came in from Berkeley, they really didn't have anything. They reached out to us, and we literally drove it overnight from northern California where we're based, all the way up to Boise to deliver to them.

Flint in Michigan, Texas. I mean, you name it. Syracuse New York. Washington. That's where Cops Direct is, and how much are these departments paying for the support? Zero. Zip, zilch, nada, because we are a non profit organization, and people just don't get that sometimes. How are you able to go out there and spend 20, 30, 40, 50, 60, $100,000 in equipment for these departments? How can you do that? Well, we do it because the public sees what we do. Where did my money go? Cops Direct. Well, hey, Mr and Mrs Donor, your money went to that department last week, and here's a copy of the receipt, by the way, if you're that curious as to where your money went. That's what Cops Direct is all about.

I can tell you that we have saved lives. Not only law enforcement, but civilian as well. That's not us just guessing that. That is them, the officers, telling us that anecdotally. Saying, "We used your gear in this mass shooting." We had one guy down in, I believe it was Tennessee recently, where he was a missing person, and literally went into diabetic shock or insulin shock if you will, somewhere out on a levy. The cops found him and used a Cops Direct supplied stretcher that they received from us only a day or two prior. Seriously. To find this individual who was near death, and drag him out to a point where EMS could get that person and get him to the hospital for care.

Again, what is Cops Direct all about? It's about supporting that officer who puts the badge on every day, whether it's a male or female, husband, a wife, a mother, a father, a child or daughter. All these people make up law enforcement. Giving them the ability to serve and protect in a way that goes beyond what we see them do on TV shows like SWAT or whatever it might be, and really serve our community.

I think that frankly our cops are ... The media, many of them, love to vilify law enforcement, and they like to look at that tenth of one percent who have done wrong. They want to ignore the 99.9% of the law enforcement officers out there who have kids and wives and husbands waiting for them at home, at the end of that shift. We're making sure that we're helping get those officers home at the end of the day. Back to their families, and also the citizenry as well in those jurisdictions that they serve.

I'm going to wrap up this first podcast. I don't know how it sounds, but it's going to be about 10 minutes when it's all said and done. I would ask you to let us know what you think, because we want to give you guys as much information that we can possibly give you that you may not get in the media. That's going to be a topic coming up too. We're going to have some great interview people coming onboard. We're going to try and do one of these every week or two. We'll have them on the website, et cetera, et cetera.

This is Aaron Negherbon. I'm the founder. I'm the executive director, of Cops Direct. You can email me, aaron@copsdirect.org, or you can call us on the 800 number. 800-705-COPS. Thanks for listening to this. I hope it was worth your while, and wet your whistle, if you will, on what we do and what we're going to be talking about. Thanks for listening. Thanks for your support, and if you see a cop at a stoplight or something like that, give him a thumbs up because we're used to getting middle fingers. That, I'm going to close it. We'll talk to you soon." 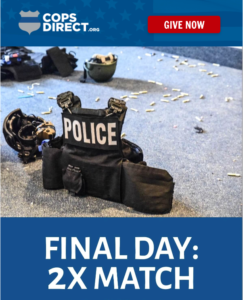